Bester describes herself as “Lovely person, smiling all the time, caring about people, hardworking.”

Workplace Support… Because of my hip it’s hard to work during the day because most of the jobs involve standing for 8 hours. And at the hotel they still expect you to stand for 8 hours, but because 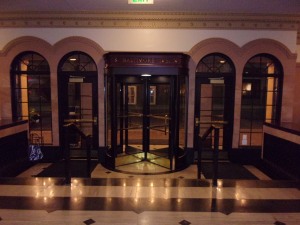 I work overnight it’s okay. They let me sit down. I just really appreciate this hotel so much because the last time I worked was 2006, and since then I’ve been trying to find a job, and it’s been really hard. But in 2006 I was on crutches and in a wheelchair. So really I wasn’t able to [work]. But after my hip treatment in 2010 I was okay to work again, so I started looking. I was trying to find a job, but no one would hire me. Just absolutely no one. But this particular hotel, they didn’t care that I was on crutches. They were really happy with me. After 3 months I got sick and went into Truman Behavioral Health Hospital for about a week. When I went back, everybody was like, “Are you okay?” Everybody was so supportive. My coworkers don’t judge. They really accepted me, and so I feel really at home when I’m working there. I really like it.

Fundraising for Treatments… Last weekend we had a ladies retreat. I belong to a group called GRACE that’s really like a support group. We meet once a month, and every year we have a retreat where we stay at a hotel overnight. I started a project to raise money so I can go back to China for hip treatment. When people see me on crutches I 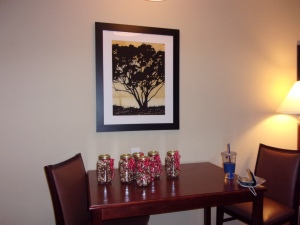 experience the most discrimination. I just would really like that to go away. So I’d really like to get treatment for my leg. I started doing a fundraiser; I’m selling popcorn for $4 a jar. So those were the first ones that I made, and I took them to the retreat to show my friends. So I was able to sell all of them that I took there. The only treatment in the US is a total hip replacement. But then when they do a total hip replacement they have to do it every 8-10 years because it wears out. So if I had the surgery now, I have to go through so many of them in my lifetime. And the surgery is really expensive as well, and Medicaid is not going to pay for it.

Finding Your Sanctuary… This is the Truman Behavior Health Clinic. Of course, there is a lot of stigma with mental illness. But this place is more like a sanctuary to me, just because that’s where I go for my mental health. That’s where I go for my therapy. So if I have anything that is bothering me I’m able to sit down with my therapist and talk about it. And then I also have a case worker that I work with that is in that office that is also pretty helpful because if I have doctor’s appointments, she picks me up, takes me there, and helps me with everything that I need.

Eating Healthy… Because of all my illnesses, I’ve had to

take my meds. My daughter was only 10 years old when I got the diagnosis. So I had to make up my mind: Should I continue doing this and then not be able to work, am I going to be able to take care of my daughter? So I stopped taking the medication for all that period. So the doctor that I was seeing, she helped me to eat all organic foods, and take certain medications that she was giving me. Basically supplements that don’t have side effects. So that’s how I survived all those years until my daughter got done with school. A lot of times when people think of people who are HIV positive, they think we are unhealthy and I respond, “No not really, I’m going to still eat healthy.” So food for me is – the way I spend the most money. I don’t go cheap on food. I’d rather go without clothing or go to the thrift store and buy clothes. But for food I’ll still go to the best stores I can.

For links to more HIV Information….