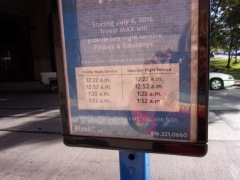 No schedule… I took this because I thought I had a scheduled time to die. But there is no schedule for me.

Like an outcast… I had some rocks in my backyard of my apartment, like four or five little ones, the big one stuck out. I took a picture of it. I once felt like that outcast, the one rock by itself. But, if you are HIV positive you can do anything that a person without HIV can do, basically, as far as prospering in the world. 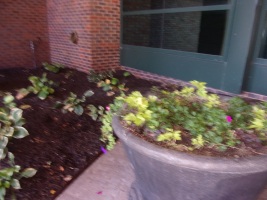 Becoming alive… I took a picture of this big old flowerpot, and it had mostly dead plants in it, flowers. And one flower was hanging out over the pot. And it was real pretty bright yellow. And so that reminded me that when I was diagnosed, I felt like I was dead inside as a person trying to grow. And now I’m hanging outside that pot, alive like a flower. 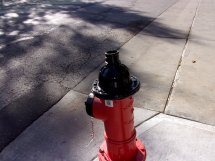 Lifesaving… I have information that I can give other folks. Use a condom, don’t share needles. You’re not going to die. Take your medicine right. Deal with the effects. Always take your medicine. I have that information because I know it works for me. I have all the sources for lifesaving and the information about being HIV positive.

Healthy and strong… I took a picture of the dirt on the ground, the dirt and the grass, dirt first and the grass second, because the dirt is like the grass’ medicine. Grass needs dirt to stay alive. I had to have something to stay alive anyway if I wasn’t HIV positive. But I need my medicine just like the grass needs dirt. And I’m just growing healthy and strong, and I’m stabilized with my white cells. And I’ve grown past all that little stuff. My partners know I have HIV, and have known for years, and we always use a condom.

For links to more HIV Information….